The origin of lighters(1)

Summary:According to records, since about 10,000 BC, the ancients did not use wood friction, twisting or dri...
According to records, since about 10,000 BC, the ancients did not use wood friction, twisting or drilling, or flint to ignite each other; later, they also used pneumatic principles to ignite—ignition pumps or pneumatic igniters were used in the French in the Middle Ages. Dimonère refers to a pneumatic igniter with improved quality. From the 14th or 15th century to the beginning of the 19th century, impact igniters were very popular. At the end of the 17th century, a "Thuringian igniter" with tinder and sulfur matches appeared. There is also the so-called "fuse igniter".
The convex lens used as a lighter since the 13th century was popularized at the end of the 18th century. In 1823, the German chemist De Bellener invented a lighter named after his surname. De Bellena was originally a pharmacist, and in 1810 he was appointed professor of chemistry and pharmacology at the University of Jena. During his lifetime, many improvement measures were proposed for the dyeing method, and the catalytic effects of platinum, nickel, manganese dioxide, etc. were studied, and the Debelina igniter was manufactured on the basis of these studies. In 1812, the Frenchman Bettole discovered combustible gas in various chemical experiments, and later generations made an immersion lighter based on Bettole's invention.
In 1823, the German chemist Behrena discovered in the laboratory that hydrogen gas would catch fire when it meets platinum cotton. This discovery sparked his idea of ​​trial-manufacturing a lighter. Debeleina uses a small glass tube to hold an appropriate amount of dilute sulfuric acid. The tube is equipped with an inner tube, and the inner tube is filled with zinc flakes. The glass tube is equipped with a top cover. The top cover has a nozzle, platinum cotton and a switch. The zinc flakes in the tube are contacted with sulfuric acid to generate hydrogen gas. The pressure generated by a certain amount of hydrogen discharges the sulfuric acid in the inner tube into the glass tube. When the switch is turned on, the hydrogen in the inner tube rushes to the platinum wool and ignites; the pressure in the inner tube and the glass tube is rebalanced, and the sulfuric acid enters the inner tube again , Reacts with zinc flakes to produce hydrogen gas. Thus the world's first lighter was born. However, it has the disadvantages of being bulky and not portable, the glass shell is fragile, and the sulfuric acid overflow is dangerous, etc., and it has not been popularized.
In 1920, a wick-type lighter appeared in France. The wick was soaked in saltpeter powder and was easily ignited by sparks. Later, it was changed to a benzene lighter with the wick immersed in benzene. This kind of lighter sometimes leaks fuel and requires frequent replacement of the wick.
During World War II, ammunition experts used piezoelectric effects to detonate bombs. The front end of the bomb is equipped with crystals like potassium sodium tartrate and some ceramics. When subjected to a strong impact, a high-voltage charge will be generated instantaneously to detonate the explosive. After the war, Japan successfully used the piezoelectric effect on lighters, generating 6000-8000 volts in one-third to four-thousandths of a second, causing the sparks to ignite butane, eliminating the need for dry batteries or flint.
Related Products：METAL ELECTRONIC LIGHTER 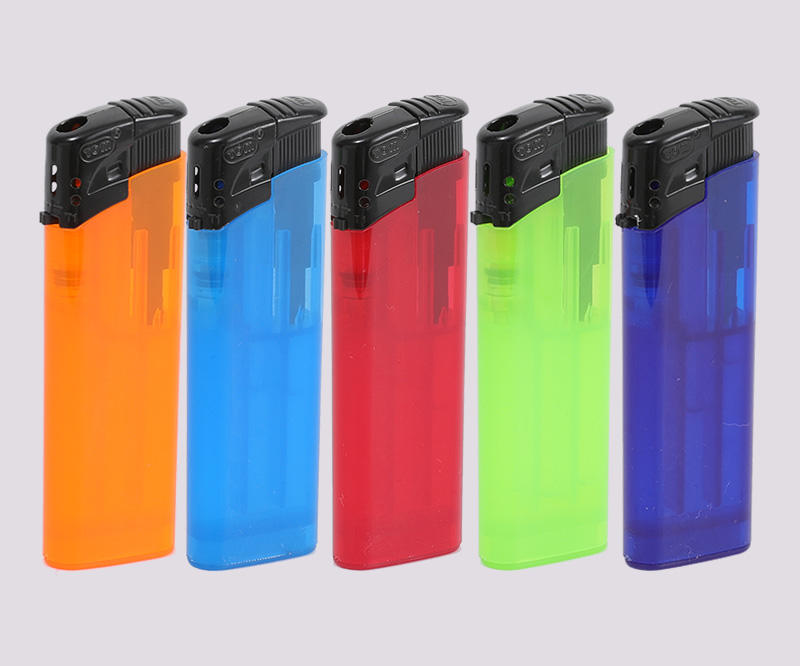