Home / News / What are the characteristics of butane gas in the lighter?

What are the characteristics of butane gas in the lighter?

Summary:Butane (CH3CH2CH2CH3), also known as n-butane, is the general term for two alkane hydrocarbons with ...
Butane (CH3CH2CH2CH3), also known as n-butane, is the general term for two alkane hydrocarbons with the same molecular formula (C4H10). Including: n-butane and isobutane (2-methylpropane). Butane is a flammable, colorless, and simply liquefied gas. It is an important material for the development of petrochemical and organic materials, and its use has been paid more and more attention. Tell you the characteristics of butane gas inside:
Properties: colorless flammable gas. The melting point is 13535C, the boiling point is 05C, the relative density is 0.5730 (25C), the refractive index is 13326 (20. C), and the critical temperature is 1520l. C, the critical pressure is 38OkPa, the critical volume is 4387ml
g. Insoluble in water, easily soluble in ethanol, ether, chloroform and other hydrocarbons. It forms an explosive mixture with air, and the explosion limit is 19%~84% (evening). To
Production process: This product exists in oil field gas, wet natural gas and cracked gas, such as petrochemical light oil cracking ethylene equipment, the co-produced carbon four hydrocarbons, about 40% of the ethylene output; petroleum refinery catalytic cracking equipment The produced C4 hydrocarbons account for about 6% of the equipment's processing capacity, and butane can be obtained separately.
l From oil field gas and wet natural gas, respectively, pressurized and condensed them separately to obtain liquefied petroleum gas containing propane and butane, and then use distillation to obtain propane and butane respectively.
2 From the petroleum cracking C4 fractions, for example, the butane content of the naphtha medium-depth cracking products is about 65%, and the heavy fraction cracking products have even lower butane content. In recent years, some refinery catalytic equipment has switched to molecular sieve catalysts and hydrocracking processes, resulting in an increase in butane yield in refinery gas and a decline in butene yield. The respective processes of butane are as follows. The tail gas from the catalytic cracking equipment is fractionated, separated into C3, isobutene and C5 fractions, and then enters the former distillation tower from the bottom of the tower. From the top of the extractive distillation tower, more than 90% of butane is obtained.
Uses: In addition to being directly used as fuel and refrigerant, this product is used to produce a variety of organic materials, such as butene and butadiene can be produced by dehydrogenation; isobutane can be produced by isomerization; Catalytic oxidation can produce maleic anhydride, acetic acid, etc.; halogenation can produce halobutane; nitration can produce nitrobutane; catalysis can produce carbon disulfide at high temperature; hydrogen can be produced by steam reforming. In addition, butane can also be used as a motor fuel blend to control evaporation; it can also be used as a deasphalting agent for heavy oil refining; a solvent for wax deposition in oil wells; an overflow agent for secondary oil recovery; a resin foaming agent; Refrigerants for fresh water, and solvents for olefin Ziegler polymerization, etc.
Chemistry
Reaction and use: Alkanes are inert gases, because their C-C and C-H bonds are very strong. They do not react with acids, alkalis, metals or oxidants. Surprisingly, they do not react with acids and bases. But gasoline (octane) does not react with concentrated sulfuric acid, alkali metals or potassium permanganate. It burns to form carbon dioxide and water vapor
Butane + oxygen-
Carbon dioxide + water vapor
2 C4H10 + 9 O2 -
8 CO2(g) + 10 H2O
Assuming that there is sufficient air supply, carbon dioxide and water vapor will be generated when butane is burned. Assuming a lack of air supply, carbon and carbon monoxide will be generated. The daily uses of butane include domestic liquefied petroleum gas, and it is also used as fuel in lighters and portable butane gas stoves.
Since Freon and CFCs can cause ozone layer depletion, it has attracted attention. Therefore, the refrigeration system, especially the household refrigerators and refrigerators, has increased the use of isobutane (2-methylpropane) as a refrigerant instead of Freon. Other isobutanes are also added to sprays to replace chlorofluorocarbons.
Related Suggestion : PLASTIC+METAL STRAIGHT INTO THE LIGHTERS 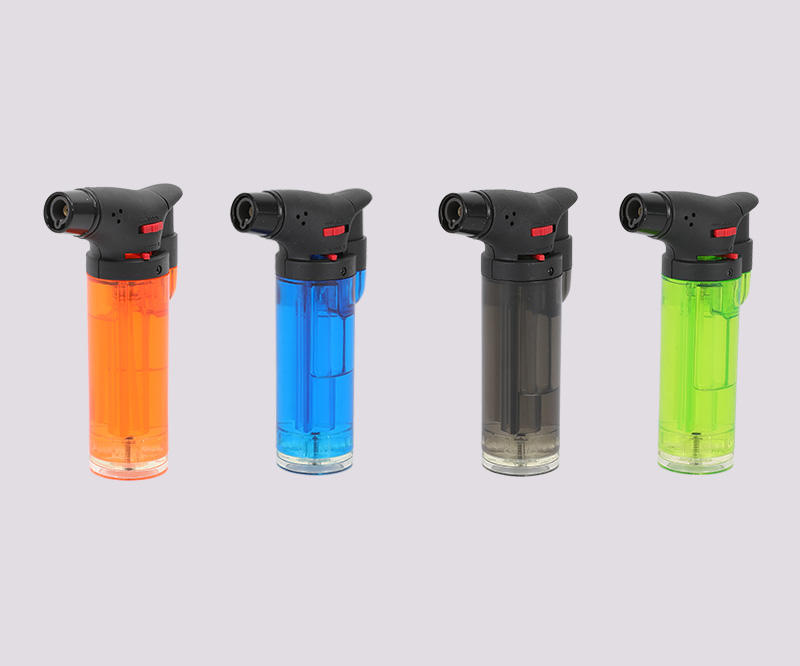 PREV：How to replace flint?NEXT：What to do if the lighter is broken?